M&Ms is going fruity for their next limited edition flavor. The company will introduce the new Strawberry Nut flavor M&M to store shelves this spring. The new product will reportedly taste similar to last year’s Strawberry Milk Chocolate Covered M&Ms, only this time with a nut.

Man Paddleboards Across The Atlantic Ocean

Chris Bertish is officially in the record books. The surfer became the first person to cross the Atlantic Ocean solo, unassisted and unsupported, on a stand-up paddle board.

All in all, he traveled 4-thousand-500 nautical miles from Morocco to Antigua and it wasn't exactly an easy trip. Over the 93-day journey, he encountered everything from equipment troubles to sharks.

This trip wasn't all for the glory, though. Bertish set out to raise enough money to build at least five schools in South Africa, provide monthly dividends to feed and educate thousands of children and pay for surgeons to carry out cleft lip and palate operations. He teamed up with Signature of Hope Trust, the Lunchbox Foundation and Operation Smile and managed to raise over $412-thousand.

Today is the International Day of Awesomeness

March 10th is the International Day of Awesomeness! This day gives us the opportunity to celebrate every person, place, thing, or idea in the world that is awesome. As the official tag line points out, “No one’s perfect, but everyone can be awesome.”

Kevin Lawver declared the need for an International Day of Awesomeness in 2007. He was working with intern Freddie Maneiro who suggested that the office should celebrate Lawver’s awesomeness. Lawver replied that there should be an International Day of Awesomeness. He posted the idea to Twitter and the rest is history. Why March 10th? Because that's Chuck Norris' birthday - but this isn't really a salute to Chuck Norris, the man. This is a tribute to the awesomeness of the the myth of Chuck Norris.

The easiest way to celebrate the International Day of Awesomeness is to be awesome. You could organize a group of your friends to perform feats of awesomeness with. You could write a blog entry about someone you think epitomizes the ideals of awesomeness. As we get closer to the day, we'll have more concrete tips for things you can do to celebrate this very important (but fun, fun, fun - we can't stress that enough - the International Day of Awesomeness should be fun and not taken too seriously).

March 10th is Middle Name Pride Day! This day honors the seldom used middle name that often, will set you apart from others. But hey, if you’ve got one (some cultures don’t use them), you should know that it was selected with care, so you should be proud of it. Why? Here's two big reasons to be proud of your middle name:

First, there are plenty of John Smiths and Mary Jones. It’s the middle name your parents gave you that makes your whole name unique. It often was selected to honor a friend or relative. That person may have possessed certain characteristics that they want you to inherit.

Do you know why you were given your middle name? If not, today’s the day to find out. If it was in honor of someone, find out a little more about that person.

So enjoy your middle name on Middle Name Pride Day, and every day!

What exactly is a bagpipe? The term “bagpipe” means a wind instrument that uses enclosed reeds to produce sound. Air feeds the reeds with a constant flow of air from a reservoir in the form of a bag. In each area that it is found, the bagpipe may change in sound and shape. It’s been claimed that this ancient instrument is represented on a Hittite slab dated to 1000 BC!And just in case you think pipes can’t be “cool” – check out the Red Hot Chilli Pipers. An act out of Scotland that combines classic piping with modern music. In a word – it’s pretty awesome. Check out their renditions of AC DC’s “Thunderstruck,” Queen’s “We Will Rock You” and Survivor’s “Eye of the Tiger” to the right. Need more? Avicii’s “Wake Me Up” and Journey’s “Don’t Stop Believin’” get the bagpipe treatment, too.

Go ahead and rub it in if you’re the oldest child: First-born children exhibit higher IQ scores than their younger siblings, a new University of Edinburgh study suggests. And their superior smarts are evident from the time they are barely a year old.

The researchers followed 5,000 children from pre-birth to the age of 14, and assessed the kids every 2 years with reading, letter-matching, and picture vocabulary tests. They found that while parents with multiple children supported each kid equally on an emotional level, first-borns received more tasks that improved their thinking skills.

SIGN OF INTELLIGENCE #2: YOU HAVE A F**KING TERRIBLE MOUTH

Let those swear words sing—intelligent people use more profane language, a study from Marist College in New York found. For the study, researchers asked the study participants to fire off as many words—in both speaking and writing—as they could in various categories, like obscenities, animals, and words that started with a specific letter. They found that people who were able to list more everyday terms came up with more curse words, too.

While you were in the womb, that is. After studying expectant moms during pregnancy and their children post-birth, Toronto researchers found that mothers who suffered from morning sickness gave birth to children who scored higher on some intelligence tests than mothers who didn’t spend their mornings hunched over the toilet. The link? It’s possible that women who deal with morning sickness expose their babies to higher levels of pregnancy hormones like estradiol and prolactin, which may result in enhanced fetal brain development, the researchers write.

Smarter people stay up late, according to one U.K. study. After following more than 20,000 adolescents for eight years, the researchers discovered that those with higher IQs were more likely to become night owls once they reached adulthood than their peers who weren't as smart.

That may be because people with higher cognitive abilities have evolved to override their natural circadian rhythm, or internal clock, that pushed them to settle down to sleep earlier, the researchers write. Our ancestors instinctually slept at night to avoid nocturnal predators—but intelligent, modern humans have evolved beyond those risks, and have adapted to take advantage of nocturnal hours that our ancestors couldn’t.

Hate driving into the city, large events, or tightly packed bars? It might be an indication of your intelligence: After U.K. researchers surveyed 15,000 adults, they found that people with high-IQs were less happy when they lived in a densely populated area, like a big city. What’s more, they also reported higher life satisfaction when they spent less time socializing with their friends than lower-IQ people did.

The introverted-mindset comes down to evolution: Our ancestors lived in tight-knit tribes, and socializing was often necessary for survival, the researchers write. Highly intelligent people have potentially developed beyond the need for that support, meaning they may have adapted to our quickly changing society without depending on their peers.

SIGN OF INTELLIGENCE #6: YOU HAVE A TWISTED SENSE OF HUMOR

Don’t feel bad for offending everyone with your dark since of humor—it might be justified by your brilliance. A warped sense of humor signifies intelligence, according to recent Austrian research. Austrian scientists asked more than 150 people to rate “black humor” cartoons. Then, they measured their verbal and nonverbal intelligence, mood disturbance, and aggressiveness. Participants that preferred the extra vulgar jokes had higher levels of both kinds of intelligence and were less aggressive. That’s because you have to work your mental muscles extra hard to comprehend a twisted joke.

SIGN OF INTELLIGENCE #7: YOU SMOKED POT AS A TEEN

Brainy teens are more likely to experiment with marijuana and alcohol, according to a new University College London study. After following more than 6,000 adolescents from age 11 to 20, the researchers found that once academically-gifted students hit their late teens, they were 50 percent more likely to occasionally use marijuana and nearly twice as likely to persistently use it than their peers who didn’t perform as well academically. They were also more than twice as likely to regularly drink alcohol. But the experimentation stopped with those substances: During their early teens (13 to 17 years old), top students were significantly less likely to smoke cigarettes than their peers who did worse in school.

Don’t feel too guilty about that pile of junk crowding up your office: A messy environment promotes creative thinking, according to University of Minnesota research. In one experiment, psychological scientists asked about 50 participants to come up with new uses for Ping-Pong balls. People in messy rooms—think books and papers lying around everywhere—came up with the same amount of ideas as those in cleaner rooms. But their ideas were rated as significantly more interesting and creative by independent judges.

You Can Own Your Own Castle

St. Patrick's Day is approaching and what better way to celebrate than buying your own Irish castle. The big, white castle near Dublin dates back to 1787. Right now it's owned by the Guinness Beer heirs.

Ernest Guinness bought the property in 1937 and presented it to his daughter. The castle sits on five-thousand acres of rolling green grassy hills. The castle comes seven bedrooms, a dining room, a large entrance hall, three main reception rooms, a library and a four-bedroom guest house. And what does the big house cost? Only 29 and a-half million dollars. 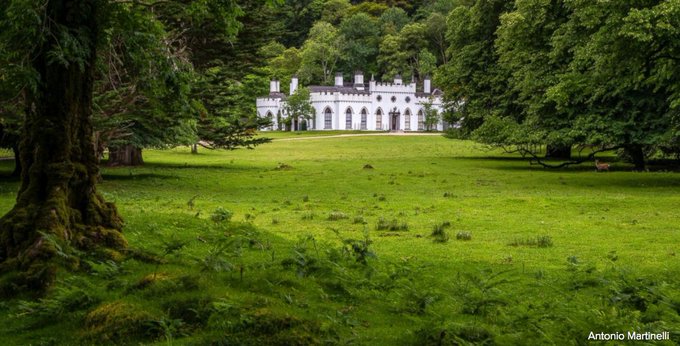 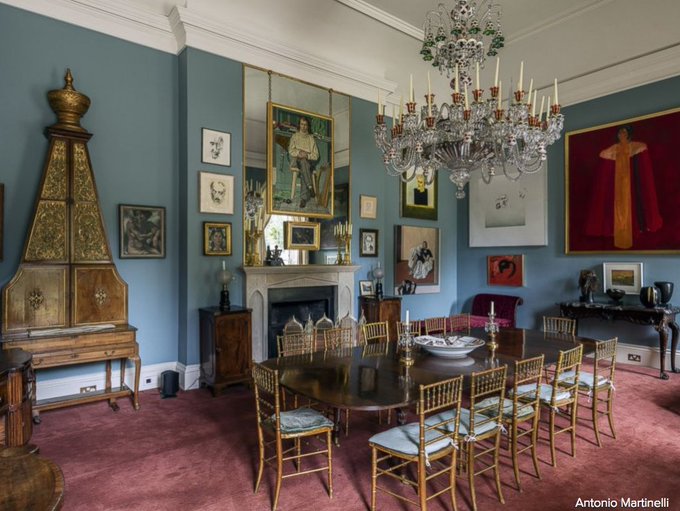 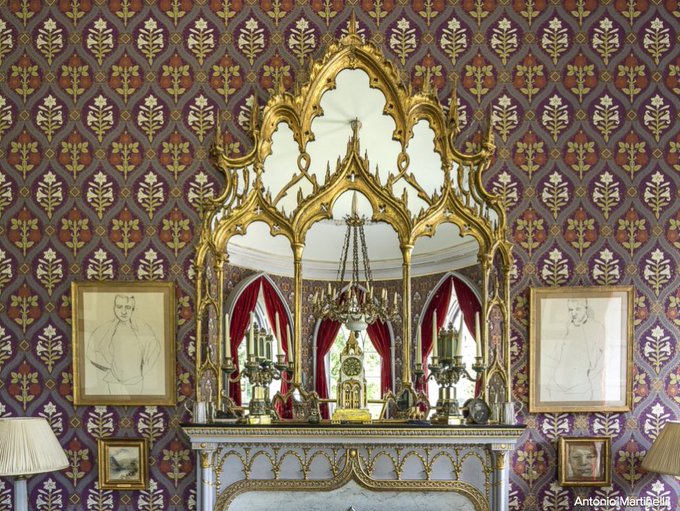 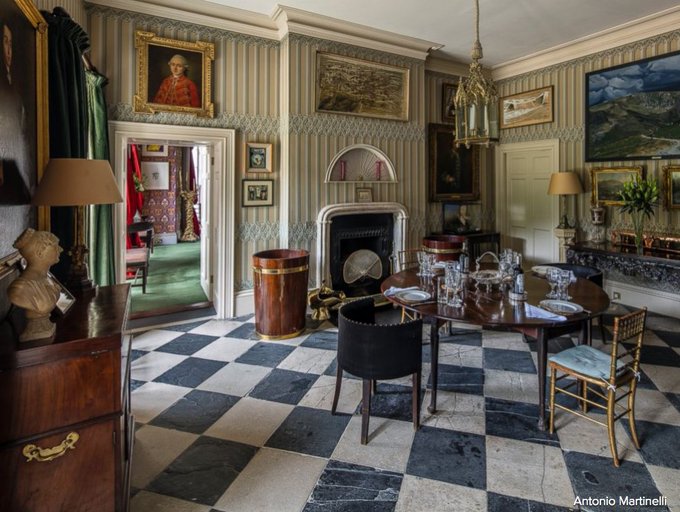 Want A New Workout? How About Hatchet Throwing?

Exercise can get boring when you stick to the same old routine all the time. But there are plenty of trendy new ways to get your fitness on when you’re ready for a change. You can take hula hooping, trampoline class, and even do yoga with goats, if that’s your thing. And let’s not forget what sounds like the scariest choice - hatchet throwing.

Yep, we’re talking hatchets, like axes. And once you learn the ever-important safety rules and proper techniques, you throw these things at wooden targets, wearing your arms out for two hours. The tradition goes back to Vikings and Native Americans, but the modern-day version can tone your core, shoulders, back and arms - while giving you a break from your regular old sweat sesh.

There are facilities that offer hatchet throwing, like Stumpy’s Hatchet House in Eatontown, New Jersey. They require a group of at least four and you each pay about $20 an hour for safety training and a lesson and then you’re throwing solo. It’s definitely not for everyone, but if you’ve got a good grip, it could make a nice change from your old spin class.

Blac Chyna Is Coming Out With A Doll

Blac Chyna certainly learned a thing or two while hanging out with the Kardashians.

The mama to Rob Kardashian’s little girl Dream is getting ready to release dolls. My3DNA, the company that also worked with Drake, had BC stand still as they took photos and prepped the product. The collaboration cost nearly 10-thousand bucks, but there’s still no word on its release.Source: TMZ