For those who don't know, tomorrow we'll welcome the annual observation of "Earth Hour." This is our chance to be the Earth’s hero. Over the last 10 years, changes resulting in massive environmental impact have taken place, but more needs to be done. Earth Hour offers everyday folks the opportunity to come together for change.

Around the globe, millions of people, businesses, and landmarks set aside an hour to host events, switch off their lights, and make noise for climate change action. This year? Earth Hour is at 8:30pm tomorrow night - March 25th.

And yes, it’s that simple. Just switch off for Earth Hour to shine a light on the need for climate action. To find out more – and to stand up and be counted – log on to EarthHour.org.

While we’re used to the good old chocolate Kit Kats here in the U.S., but around the world, the candy company has produced some wild flavors:

But Kit Kat is venturing into new territory with its potential upcoming flavor: Durian. It’s been called the world’s smelliest fruit, but it’s a delicacy in southeast Asia. Some compare the smell to rotten eggs and sweaty feet, so ya know, it’s not for everyone.

But according to Rocket News 24, Nestlé is considering bringing the “equally loved and hated” fruit to a Kit Kat. And people of the Internet have given the idea a warm welcome; this is surely one flavor we won’t really be missing over here in America. 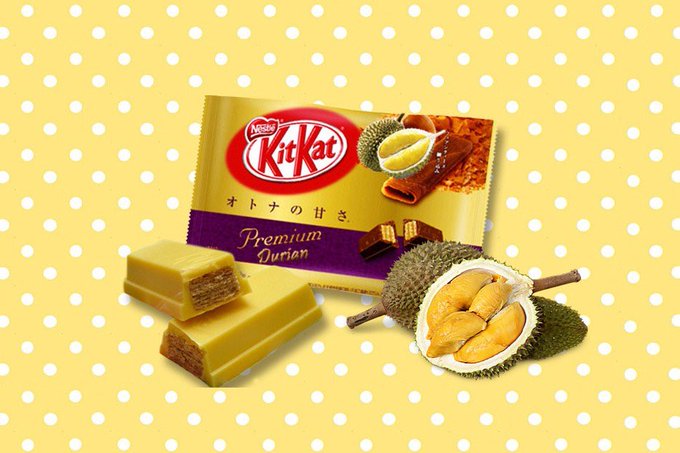 March 24th is National Chocolate-Covered Raisin Day! When you go to the movies today, skip the popcorn! I bet you didn’t know that Nestlé Raisinets are almost as popular.

Plus – they’re probably healthier. Raisins are chock full of fiber, potassium, iron, calcium, and certain B vitamins. Cover them in creamy dark chocolate – and you’ve got antioxidants and minerals too. But lets be honest – that’s not the reason you’ll eat them.

So go grab a bag of sundried chocolaty goodness and enjoy!

Here's How to Get That Song Out of Your Head

A 2016 study found pop songs and some classic rock standards often are big culprits when it comes to getting a song stuck in your head. British researchers found instances of Involuntary Musical Imagery — aka earworms — are produced from songs with easy-to-remember melodies, fast tempos and repetition among other characteristics. The study found three of the most common earworm-inducing songs were by Lady Gaga, but Katy Perry, Queen, KylIe Minogue and yes, Journey, also made the list.

However, Philip Beaman, a professor of experimental psychology at the University of Reading, said earworms happen on an individual basis - "What gets stuck in one person's head may not stick in another's." Often, they are songs we know well, are easily learned and ones we've heard recently. For instance, he said, Christmas songs pop into our brains more in December than in the summer.

Beaman and Kelly Jakubowski, the lead author of the 2016 study, have offered some methods for ridding yourself of earworms:

A simple way to stop that bug in your ear is to chew gum. Beaman, in a 2014 study, found gum chewing reduced the number of involuntary musical thoughts and affects the music hearing experience. The study was inspired by other research, which showed chewing gum interfered with a person's ability to recall words from their short-term memory and made it more difficult to imagine music and sounds.

"I had an idea that earworms are essentially the re-appearance of musical memories in short-term memory," he said, "and if that is true then chewing gum should interfere with this process."

Listen to the song

Jakubowski said some people are able to "get out of the loop" by listening to the song and achieving "closure." "Since it is the repetitive looping of the music that people can often find the most bothersome aspect of earworms," she said, "playing a song either mentally or aloud all the way to the end can help alleviate this annoying feature." Listen to another song, chat or listen to talk radio.

Having a conversation, listening to talk radio or listening

Starting a conversation, listening to talk radio or simply listening to another song can help distract people from their earworms. The reason behind this method is similar to Beaman's gum chewing scenario. Listening to other music or talk, Jakubowski said, uses similar brain resources as the earworm.

"It is very difficult for an earworm to persist if the mind is also engaging with other musical or verbal material," she said.

Beaman said doing a puzzle, such as sudoku, may help, "provided the puzzle isn't either so easy or so hard that you find your mind wandering away from it."

The "fade away" method means letting the song dissipate from your brain without actually fighting it. It's a method borrowed from other brain science that suggests trying to suppress thoughts can bring on more of the thoughts.

"The earworm phenomenon might be similar in that attempts to actively displace earworms may sometimes backfire and actually increase the length of the episodes," she said.

We’ve all experienced hotel letdown. You arrive at what you thought would be a majestic place to stay, only to be assigned a corner room on the first floor, with a view of the parking lot and the faint scent of cigarettes in the air.

Pro tip: This is why you should pretty much ALWAYS ask to switch hotel rooms after seeing the first one you’re offered.

Oftentimes, the second room you’re assigned (or third, or fourth if you’re the daring sort) is much, much better than the first. All it takes is a gentle inquiry to land something spectacular, even when it’s not what the front desk initially prescribed.

If you’re any less than perfectly satisfied with the room you’re given, then it’s worth it to ask for a swap.

After checking out your initial room assignment, head down to the front desk and ask if there’s anything they can do to better suit your needs. Hotels often assign visitors to the most basic room in the price bracket they booked, says Zach Honig, editor-in-chief of The Points Guy.

We speculate that in doing this, hotels are saving the best rooms in the bracket for guests who complain or have special circumstances (aka guests like YOU).

Honig says he wouldn’t ask for a swap without seeing his initial hotel room first, and that’s exactly what we’d recommend.

After seeing a room firsthand, you can point out issues — such as lack of light or an odd smell or even noisy neighbors — that bolster your case for a new space.

Back in the old days of dating, which wasn’t actually all that long ago, there really was only one way to get dumped by someone you were dating. But thanks to technology, social media, and dating apps, there are endless ways to be blown off, broken up with, or jilted.

Singles today have probably been ‘ghosted’, ‘bread-crumbed’, and/or ‘benched.’ But one of the newest terms in the world of dating today is being “zombied.” And it’s basically like being ghosted - where someone cuts you out of their life out of the blue - except in this case, the ghoster comes back around weeks or months down the road. Like just when you’re finally not thinking of them all the time anymore.

So you’ll suddenly get a breezy text from your zombie, acting like nothing happened and no time has passed since they ghosted you. Or it could come in the form of a Facebook friend request. No matter the approach, the zombie just seems to appear out of nowhere.

So should we ignore the zombie when they try to reconnect? Dating coach Francesca Hogi says we should be less cynical and give them a chance instead. And if you’re the zombie, she suggests doing it “respectfully and like a grown up.” Which is how we should all be acting all the time anyway, especially when dating.

Have You Ever Seen A Couple That Looks Like They’re Related?

I find it interesting when I see couples (usually really good looking ones) that actually look like they could be related. Well researchers have found that people choose mates who tend to be of similar size, shape and ethnicity as themselves… and they may even have facial features in common. Researchers haven’t found that the presence or absence of any specific characteristics improves relationship quality. “We are not even close to being able to predict the success of your relationship,” Abdellaoui says. “I would not dare to advise someone on partner choice on what we know, especially genetics-wise. Just follow your heart.”